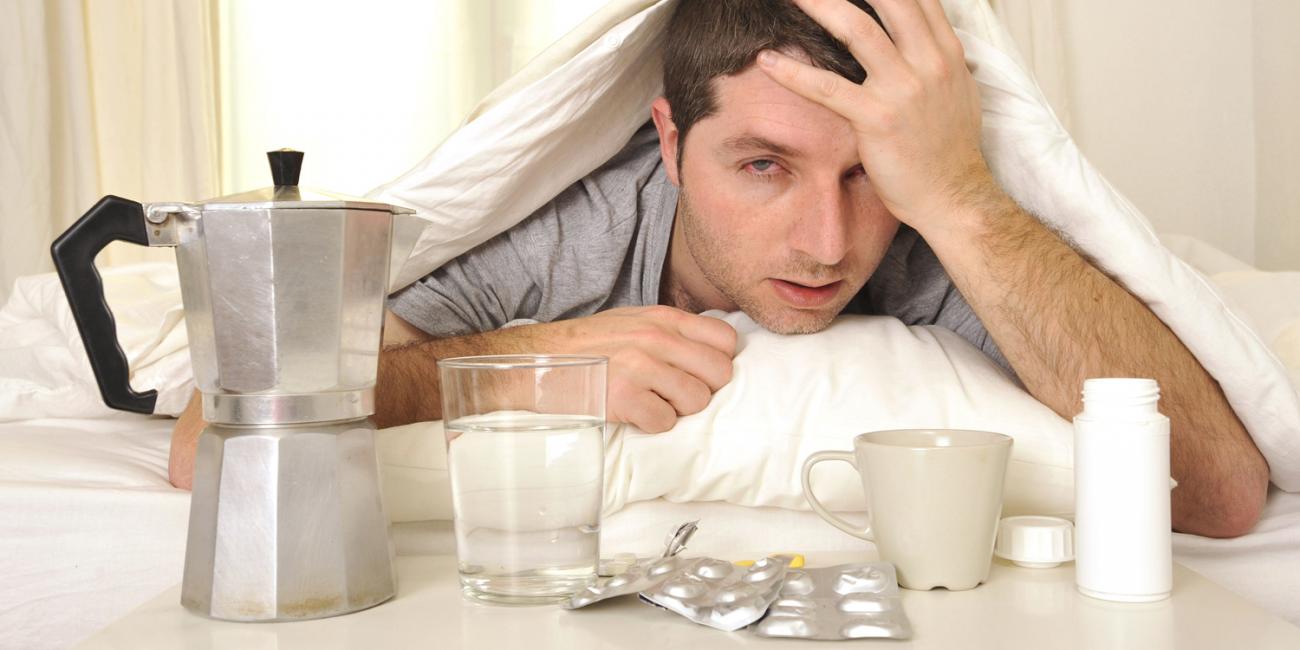 Hangovers vary from person to person, but usually involve a headache, nausea, tiredness and dehydration. Dehydration is one of the main causes of your hangover symptoms.

A hangover can leave you struggling to concentrate, feeling irritable and sensitive to light – not a good combination if you were planning to make the most of the day and not spend it in bed.

Hangover symptoms typically begin when your blood alcohol drops significantly and is at or near zero. They’re usually in full effect the morning after a night of heavy drinking. Depending on what and how much you drank, you may notice:

A hangover is a consequence of having consumed too much alcohol, which causes several adverse effects:

Alcohol makes a person urinate more, which raises the chances of dehydration. Dehydration can give the individual that sensation of thirst and lightheadedness.

Alcohol may trigger an inflammatory response from the immune system. This can affect appetite, concentration, and memory.

Alcohol consumption raises the production of stomach acids; it also slows down the rate at which the stomach empties itself – this combination can lead to nausea, vomiting, or stomachache.

Some people’s blood sugar levels can fall steeply when they consume alcohol, resulting in shakiness, moodiness, tiredness, general weakness, and even seizures in some cases.

Alcohol consumption can cause the blood vessels to dilate, which can cause headaches.

Although sleeping when drunk is common, the quality of that sleep will often be poor. The individual may wake up tired and still sleepy.

These are substances that are produced during fermentation and are responsible for most of the taste and aroma in distilled drinks (whisky or gin, for example). They are known to contribute to symptoms of a hangover. Examples of congeners include esters and aldehydes.

Alcohol metabolism produces toxic substances that can cause many of the symptoms of hangovers.

The body processes alcohol at a certain rate; consuming more alcohol before the body has had time to recover means the likelihood of a hangover increases.

We got the scoop on which remedies seem to prove real, and which ones are just part of the rumor mill.

Water is the first thing you should be drinking this morning. The alcohol you drank last night dehydrated your body and the best way to feel better is to rehydrate it.

Have a glass right when you wake up and continue pouring yourself a fresh one over the next few hours. Just be sure not to overdo it because slamming too much water can make you feel worse. Go slow, but keep the water flowing.

Go back to bed

A hangover isn’t caused by lack of sleep, but that makes it worse. Take a long nap the day after:  It’s the body’s way of healing itself.

Studies show that fructose may speed alcohol metabolism, thus reducing the risk of a hangover. It’s important to eat sugar while you’re drinking, not before, since fructose metabolizes quickly. Try plain orange juice between cocktails.

Your body could really use some vitamins right now. The easiest way is to drink orange juice for a healthy dose of Vitamin C.

Think you can “sweat out” the alcohol and other toxins you may have consumed during a night of partying? Think again. A sauna can cause potentially dangerous blood vessel and blood flow changes in your body. “The last thing you need is to disrupt the normal blood-flow patterns by extreme heat,” Dr. Cutler says.

If you’re already somewhat dehydrated, excessive sweating can be harmful, and even deadly. Researchers from the Finnish State Alcohol Company’s Research Laboratories, in Helsinki, warn that sauna bathing while hung over carries “real health risks,” including dangerous drops in blood pressure and abnormal heart rhythms.

Once you have gotten as much sleep as possible, take a cool shower. This will not only clean you up but freshen and wake up your senses as well. Some people like to switch between cold and hot water, but don’t take this to an extreme as the shock could do even more damage to your system.