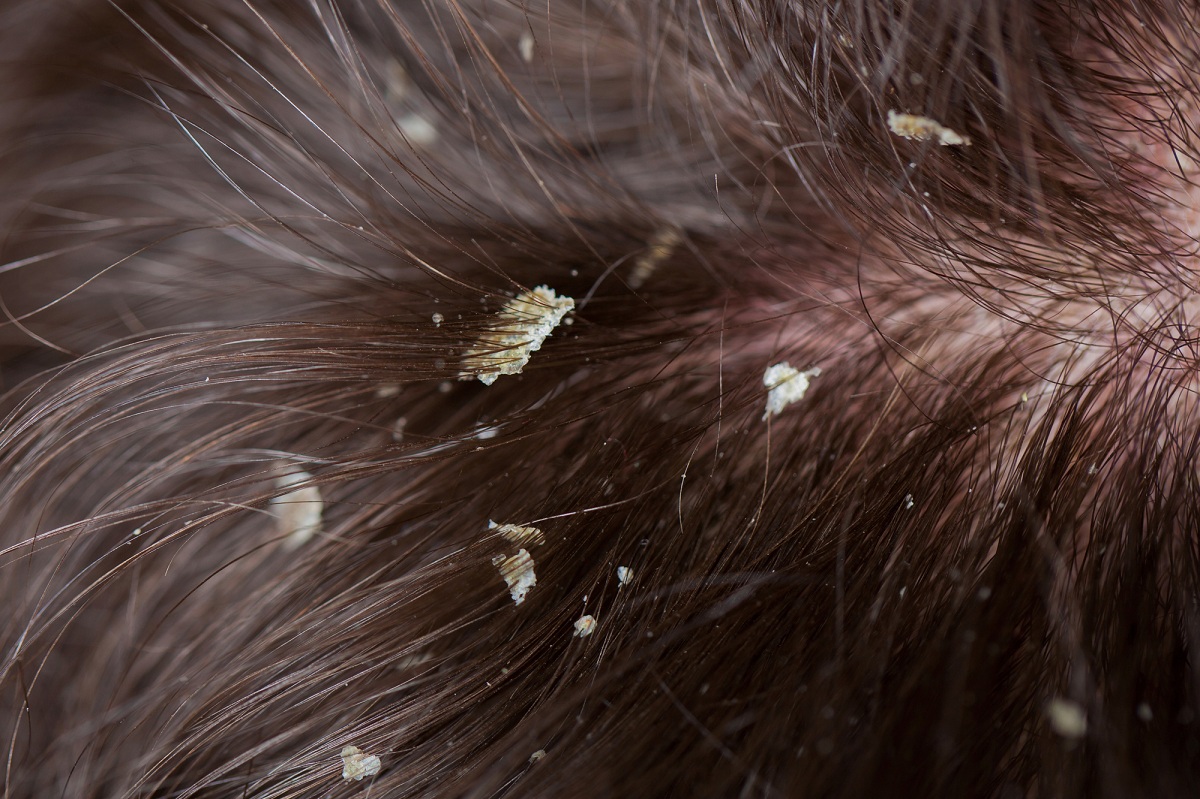 Dandruff is a common chronic scalp condition marked by flaking of the skin on your scalp. Dandruff isn’t contagious or serious. But it can be embarrassing and sometimes difficult to treat.

The exact causes of dandruff are unknown.

One theory is that it is linked to hormone production, as it often begins around the time of puberty.

People with seborrheic dermatitis have irritated, oily skin, and they are more likely to have dandruff.

Seborrheic dermatitis affects many areas of the skin, including the backs of the ears, the breastbone, eyebrows, and the sides of the nose.

The skin will be red, greasy, and covered with flaky white or yellow scales.

Seborrheic dermatitis is closely linked with Malassezia, a fungus that normally lives on the scalp and feeds on the oils that the hair follicles secrete.

It does not usually cause a problem, but in some people it becomes overactive, causing the scalp to become irritated and to produce extra skin cells.

As these extra skin cells die and fall off, they mix with the oil from the hair and scalp, forming dandruff.

Combing or brushing the hair regularly reduces the risk of dandruff, because it aids in the normal shedding of skin.

People who are sensitive to yeast have a slightly higher chance of dandruff, so yeast may play a part. Dandruff is often worse during the winter months and better when the weather is warmer.

This may be because ultraviolet-A (UVA) light from the sun counteracts the yeast.

People with dry skin are more likely to have dandruff. Cold winter air combined with overheated rooms is a common cause of itchy, flaking skin. Dandruff that stems from dry skin tends to have smaller, non-oily flakes.

Certain hair care products can trigger a red, itchy, scaling scalp. Frequent shampooing may cause dandruff, as it can irritate the scalp.

Some people say not shampooing enough can cause a buildup of oil and dead skin cells, leading to dandruff, but evidence is lacking that this is true.

People with psoriasis, eczema, and some other skin disorders tend to get dandruff more frequently than others. Tinea capitis, a fungal infection also known as scalp ringworm, can cause dandruff.

Adults with Parkinson’s disease and some other neurological illnesses are more prone to dandruff and seborrheic dermatitis.

One study found that between 30 and 83 percent of people with HIV have seborrheic dermatitis, compared with 3 to 5 percent in the general population.

Patients who are recovering from a heart attack or a stroke and those with a weak immune system may be more prone to dandruff.

Not consuming enough foods that contain zinc, B vitamins, and some types of fats may increase the risk.

There may be a link between stress and many skin problems.

Dandruff is more likely from adolescence through middle age, although it can be lifelong. It affects men more than women, possibly for reasons related to hormones.

Dandruff can almost always be controlled, but dandruff treatment may take some trial and error. In general, daily cleansing with a gentle shampoo to reduce oiliness and skin cell buildup can often help mild dandruff.

If you develop itching, stinging, redness or burning from any product, stop using it. If you develop an allergic reaction — such as a rash, hives or difficulty breathing — seek immediate medical attention.

Drugstore remedies might include shampoos with zinc pyrithione, which targets fungus and bacteria; ketoconazole, which also fights fungus; coal tar and selenium sulfide, which slow the growth and die-off of skin cells on your scalp; and salicylic acid, which loosens flakes so they can be washed away. For some trusted natural treatments, read on.

One study showed that shampoos with just 5 percent tea tree oil significantly improves the severity of dandruff. You can also add a few drops of tea tree oil to your favorite shampoo as you wash normally.

Dandruff relief may be no farther away than your refrigerator. Just massage 2 tablespoons lemon juice into your scalp and rinse with water. Then stir 1 teaspoon lemon juice into 1 cup water and rinse your hair with it. Repeat this daily until your dandruff disappears. Lemon’s acidity helps balance the pH of your scalp, which helps keeps dandruff at bay.

Being a mild exfoliant, baking soda helps remove dead skin cells and absorbs excess oil. It can also help balance pH levels on the scalp and reduce the growth of fungi that cause dandruff.