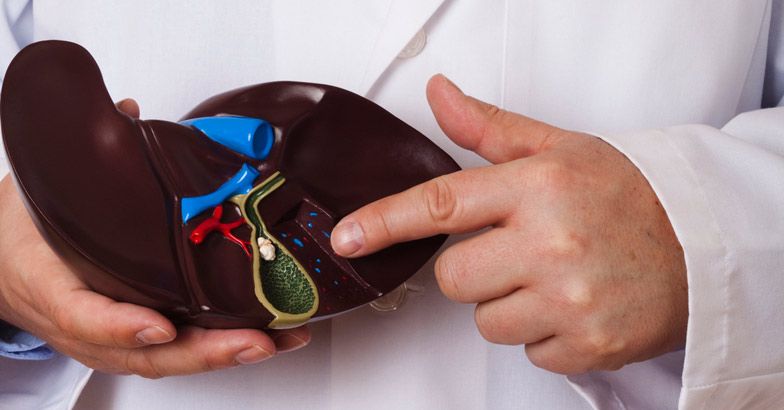 Gallstones range in size from as small as a grain of sand to as large as a golf ball. Some people develop just one gallstone, while others develop many gallstones at the same time.

It’s not known exactly what causes gallstones to form, though there are some theories.

Too much cholesterol in your bile

Too much bilirubin in your bile

Bilirubin is a chemical produced when your liver destroys old red blood cells. Some conditions, such as liver damage and certain blood disorders, cause your liver to produce more bilirubin than it should. Pigment gallstones form when your gallbladder can’t break down the excess bilirubin. These hard stones are often dark brown or black.

Concentrated bile due to a full gallbladder

The majority of people with gallstones experience no symptoms at all. This is because the stones stay in the gallbladder and cause no problems.

Sometimes, however, gallstones may lead to cholecystitis (inflamed gallbladder).

The primary symptom is pain that comes on suddenly and quickly gets worse. This pain can occur in the right side of the body, just below the ribs, between the shoulder blades, or in the right shoulder.

Other possible symptoms can occur in association with complications:

When a stone gets stuck in the opening of the gallbladder, and will not easily pass through, the contraction of the gallbladder may cause severe pain. When this happens, the patient may experience biliary colic – a painful condition.

The pain is felt in the upper part of the abdomen, but can also exist in the center or to the right of the abdomen. Pain is more common about an hour after eating, especially if the patient has had a high-fat meal. The pain will be constant and last a few hours, and then subside. Some patients will have non-stop pain for 24 hours, while others may experience waves of pain.

If the gallstone leaves the gallbladder and gets stuck in the bile duct it may block the passage of bile into the intestine. The bile will then seep into the bloodstream, and the patient will show signs of jaundice – the skin and the whites of the eyes will be yellow.

In most cases, this complication will require the surgical removal of the gallstone. For some patients the gallstone eventually passes into the intestine.

If a small gallstone passes through the bile duct and blocks the pancreatic duct, or causes a reflux of liquids and bile into the duct, the patient may develop pancreatitis.

These natural remedies will not only cure the symptoms like nausea, vomiting and indigestion along with pain but will also make you get rid of your gall stones.

Juice therapies are what are mostly recommended by traditional natural remedies for gallstones. Among these juices, one that is made from the combination of beetroot, cucumber and carrots is highly effective for gallbladder. Beets not only strengthen and cleanse gallbladder and your liver but also help in cleansing colon and your blood. Cucumber, with its high water content, is great for detoxifying liver as well as gallbladder which is also done by carrot juice high in vitamin C and other rich nutrients.

Dandelion herb helps support your liver which aids your gallbladder in its functioning. The dandelion Leaves help in promoting bile excretion from the liver thus detoxifying it and metabolize fat efficiently. They are also effective when it comes to stimulate your sluggish gallbladder. So, it does make sense to use dandelion to cure your gallstones. You can always add the tender dandelion greens to your salad or steam them and have it. You can also have dandelion tea. Here’s the recipe for the same.

Another good ingredient for keeping gallstone attacks under control is lemon juice. It stops your liver from making cholesterol, which helps in faster recovery. The pectin in lemon juice is believed to help get rid of gallbladder pain attributed to stones.

Peppermint aids digestion by stimulating the flow of bile and other digestive juices. Plus, it has a compound called terpene that can effectively dissolve gallstones. It is also believed to help relax spasms and relieve acute gallbladder pain.

Castor oil has many medicinal and healing properties that can help minimize and reduce the number of gallstones. Its anti-inflammatory properties help neutralize inflammation and reduce pain. Plus, castor oil packs have a positive effect on the immune and lymphatic systems.

Causes and Remedies for Fungal Infection