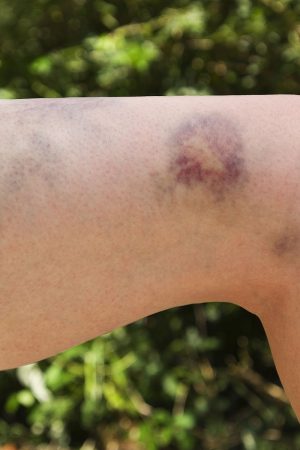 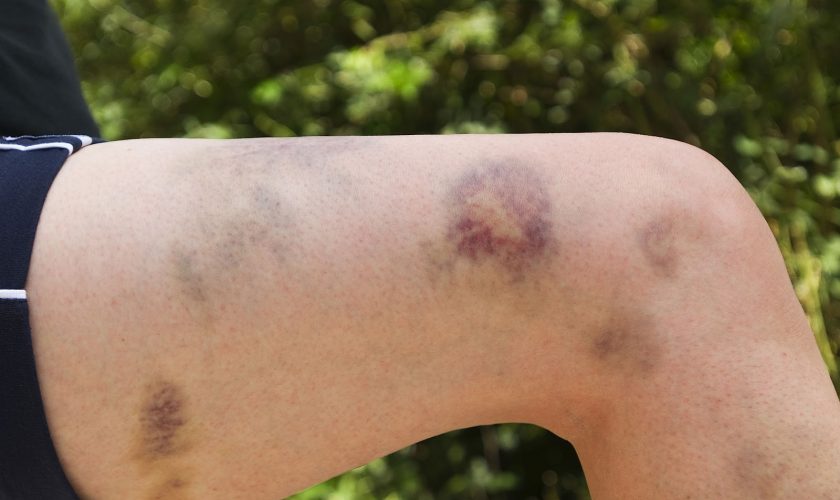 A bruise is a common skin discoloration that results from the breakage of tiny blood vessels leaking under the skin after a traumatic injury. Blood from damaged blood vessels beneath the skin collects near the surface to appear as what we recognize as a black and blue mark. This mark is from skin discoloration by red blood cells and their contents. A bruise is also known as a contusion.

People typically get bruises when they bump into something or when something bumps into them.

How can I reduce bruising?

Treat bruises on your skin by limiting the bleeding. You can do this by cooling the area with a cold compress (a flannel or cloth soaked in cold water) or an ice pack wrapped in a towel.

To make an ice pack, place ice cubes or a packet of frozen vegetables in a plastic bag and wrap them in a towel. Hold this over the area for at least 10 minutes. Do not put the ice pack straight on to your skin as this will be too cold and could hurt.

Over-the-counter painkillers such as paracetamol or ibuprofen may help relieve the pain associated with bruising.

Apply ice as soon as possible. If you cool the blood vessels around the bruised area, less blood will leak out into the surrounding tissue. Many flexible ice packs are available, specifically designed for injuries, and most rough-and-tumble athletes have the foresight to keep a couple of them in the freezer. If you’re not so equipped, soak a cloth in ice-cold water and lay it over the bruise for 10 minutes. Or use a bag of frozen vegetables wrapped in a towel. Take it off after 10 minutes, and wait 20 minutes or so before you reapply the ice pack so you don’t overchill the skin underneath.

Turn up the heat

After cooling the bruise for 24 hours, start applying heat to bring more circulation to the area and help clear away the pooled blood. Use an electric heating pad for 20 minutes several times a day. Be sure to follow the instructions on the heating pad: To avoid burns, it should go on top of, not under, the bruised limb.

You can also use a cold tea compress to soothe the affected area and reduce swelling.

The herb arnica can help decrease inflammation, reduce pain, and increase circulation to the area around the bruise.

Bromelain is a protein-digesting enzyme present in pineapples. It has strong anti-inflammatory properties and studies have found that it helps heal bruises quickly. It also has been found useful for treating bone bruises.

Comfrey is a centuries-old remedy for wounds, sprains, and bruises. You can use comfrey tea as a compress, initially as a cold compress for one or two days and then as a warm compress.

St. John’s wort has anti-inflammatory properties that can help heal a bruise. It also works as an analgesic for pain relief.

After a couple of days, massaging the bruised area with a blend of essential oils will increase circulation and help disperse the pooled blood.

Being a natural anti-inflammatory, apple cider vinegar can help heal bruises. Use it for a few days until you see improvement.

Lemon contains vitamin C which is very useful in treating skin problems. This could be a little painful treatment for bruises, but it is the most effective one. Apply lemon juice on your bruise and gently rub for about 5 minutes. It will soon heal the bruises.

Rubbing castor oil on the bruise not only reduces it, but also prevents the skin from peeling off once the bruise is gone.

The active ingredients found in witch hazel have astringent properties which prove useful to cure bruises.